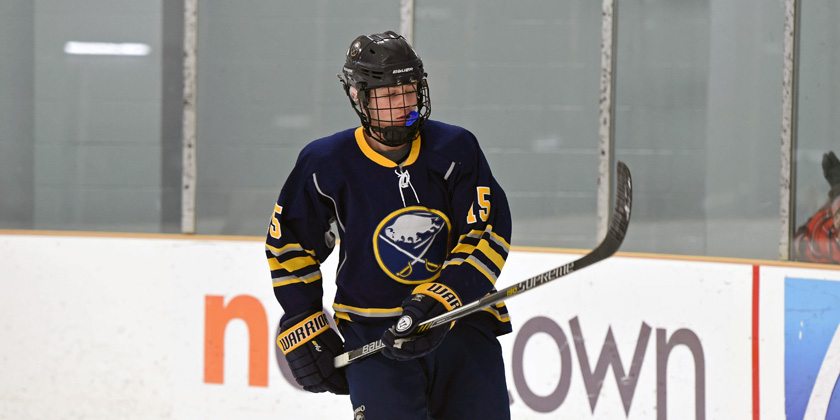 Neutral Zone headed to Springfield, MA to check out the Rifles East/West invite. We focused on the U16 division as it was a quick tournament and the U18 group was up the road in Amherst.

Games were two 22.5 minute halves on day one and one 30 minute half on day two. The River Rats took home the championship over Mid Fairfield 1-0. It was a good experience with a lot of talent. We felt comfortable writing something about 50 or so players. About 1/2 of those below are new additions to Neutral Zone.

We recognize that these guys are young and playing a possible 120 plus minutes of hockey in 36 hours is not easy. We account for that and as you will read, we have very little negative to say about this age group. If a player appears on this list, it means they had a good tournament overall and grades simply distinguish between those players this specific weekend.
A sample of the scouting reports mentioned below………..
Zachary Rehbaum (L, 5’10”/165lbs; Buffalo Regals, ‘00)-He was perhaps the best overall player in the invite. Zachary is strong on his skates and has terrific edges. He played a tough, skilled, fast game and created offense in a multitude of ways. He has a quick, accurate shot. He gets to the front of the net for rebounds and tips. The winger is good off the cycle and in transition. One play, he stole the puck vs. the Rifles. He used his speed to push the D into a bad gap. He then snapped a shot “bar down” short side. The 2000 also plays with just enough “nasty” to irritate and create even more space without taking bad penalties. He was excellent and committed to Brown very soon after this event. College: Brown Grade: A