The London Knights hosted the Wendy Dufton Memorial Tournament from October 7th through the 9th  2016 in London, Ontario. Neutral Zone sent two scouts to the event. Below are 70 players that stood out/received an evaluation from one or both of our scouts. We consolidated their evaluations and they can be seen here. Grades are…

OJHL game Aurora Tigers at Lindsay Muskies; October 28, 2016 Focus on Lindsay. Players below stood out and rates are in relation to others on the list. #7 Owen Barnett (L, 6-0/225, Lindsay Muskies, ’97) Defence. Bigger defender who seems to have heavy feet and needs to improve overall agility. Game rating is a C….

Grades reflect only performance in this game.

MacDougall has a powerful skating stride and moves the puck well playing center and uses his wingers effectively. He is methodical with the puck on his stick and looks to make a play rather than give up possession of the puck.  He knows how to create separation as the high guy on a 3-on-2 and supports his D down low in the defensive zone.  He needs more structure when penalty killing especially in the neutral zone where he goes at the puck even if a teammate is already there.

Neutral Zone sent two of our top scouts to South Bend, IN for the STX Elite Shootout; two former pro players and now regional scouts with Neutral Zone. Sean Tallaire, former Lake Superior standout and our head Michigan scout, came over to see the action as well as local Chicago scout Jeff Salzbrunn, a former CHL and then AHL/ECHL player.

STX has teamed with 200×85 LLC, a company that puts together elite hockey showcases and clinics including the well known Bauer Showcase and STX Top 68 Camp. This showcase featured many of the top bantam teams in the US and Ontario. We put together a list of the top 55 players in the event, sorted by teams.

As always, the grades provided are a  snapshot of how the players performed in this particular event and not a reflection of their overall game. Our pick for tournament MVP was Owen Power of Mississauga and below are the records for each team.

Owen Power (LD) Best player overall throughout the weekend for the games we saw. Tall lengthy defenseman, very smooth skater who always makes the smart decision. Really impressive skater for his height and slender build, especially considering his age. Doesn’t have to be physical due to his reach and skating ability. He played in all facets of the game PP-PK. We would have like to see what kind of shot he had but he didn’t take too many here. He continues to develop on this pace he could be a top draft in any league in North America. Even having a late Nov birthdate.  Grade: A+

The focus at the Tier 1 Elite Hockey League event in Windsor, ONT was on the U16 level.  The league is very deep once again with future Division I players from all around the Country.  There were some good hockey players that didn’t make the top 40 this weekend, but look for some of them to appear on next month’s list as the league will take action in New Jersey.

Chase Yoder (F) (L, 5-9/156, Dallas, 02) – A bantam aged player who is playing against players one and two years older than him.  He showed very good puck skills and the ability to make plays all over the ice.  Shifty and strong on his edges, he had the ability to create in tight areas.  Showed good hockey sense and an understanding for time and space.  A fun player to watch and to track in the future as he becomes older and stronger.  He should be receiving a good amount of Division I attention at the moment.  Grade: A The Founders is once again a top-heavy Division, but some new challengers will be making strides this season. Last year saw four teams make the playoffs, but this year a lot will hinge on a youth movement. Big senior classes have graduated and some committed players have moved to the USHL, but the path to success may be paved by which incoming class can make the quickest impact. We expect Avon Old Farms, Loomis Chaffee and Salisbury to be the odds on favorites to secure playoff berths. Here are our capsules for all 10 teams in the upcoming season, ranked in order of predicted finish.

Avon Old Farms Last season was a successful one record-wise (21-2-4) for the Winged Beavers, but ended in a tough semifinal loss to eventual Elite 8 Champion Gunnery. Many of last year’s big names have moved on: F Patrick Harper (BU freshman), D Adam Karashik (UCONN commit), F Jamie Armstrong (Northeastern) and D Ben Mirageas (Providence). To be successful, Avon will need to see players like F Tyler Madden (Northeastern) and F Matt Allen (Providence) step up as offensive kingpins. They will also have many, many young weapons to mentor including: 99 F Nick Wildgoose (St. Lawrence), 99 D Ben Pirko (Union), 00 F Drew Elser (UCONN), 00 D Mac Wiseman (UCONN) plus 4.25 star BU recruit 01 F Trevor Zegras. They also welcome smooth skating defenseman Jack Babbage from the Don Mills Flyers in the GTMMHL who had a strong summer at the National Development Camp in Buffalo, NY. Oh and let’s not forget one of the best goalie prospects in the country: 4.5 star 01 Spencer Knight (BC). While this next kid might not get the press of some other blue chips listed above him, don’t count out Will Christensen, a speed/energy forward who may not dazzle on the stat sheet but he’s a high motor, no-quit type that skilled teams need. The future is very bright for Avon Old Farms and Coach John Gardner but the present isn’t to be taken lightly.

NZ’s Take: No team in prep school lost the talent Avon did this past year and that might be an understatement. Patrick Harper has been one of prep’s finest players over the past two years and Armstrong and Karashik gave the typically skilled team a physical presence. Mirageas was arguably the best pro prospect in the league and was key to their blue line in every situation. With that being said, they have a highly talented group coming in including six division one commits; led by BC recruit Spencer Knight and BU recruit Trevor Zegras. Both are ‘01s and could take some time to adjust, but they are likely the no.1 and no.2 prospects in all of prep school. Returners Matt Allen and Tyler Madden are coming off strong years and look to take their games to the next level. With a healthy mix or returning and incoming talent, Avon could be the team to beat, not only in the founders league, but in all of New England prep. Time will tell but talent is certainly on Avon’s side. Avon should return to the Elite 8 again this season despite taking on the heavy loses to departures, but with the talent more spread out it could actually benefit the Winged Beavers instead of being a one-line dominated team. 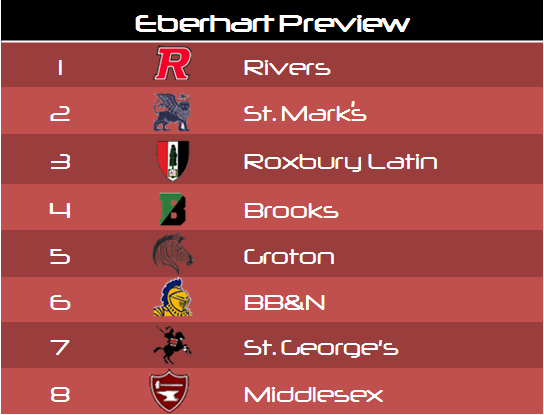 The Eberhart looks to be a Division divided as we move into 2016-17. Last year it produced four playoff teams and this year should be no different. We expect Rivers, St. Mark’s, Roxbury Latin and Brooks to be the odds on favorites to secure playoff berths. Here are our capsules for all 8 teams in the upcoming season, ranked in order of predicted finish.

Rivers The Red Wings come off a strong season with 22 wins and a berth in the Small School Championship, succumbing to eventual champion St. Mark’s. Coach Shawn McEachern has regularly found success by recruiting athletes at every position and filling in holes from departed seniors. This past year’s graduating seniors include D Frank Boie (Holy Cross commit), F Christian Capello (Bowdoin) and D Mike Gurska. Key returnees prepared to take the mantle include F Ted Wooding (34 points), F Brendan Hamblet (27 points) and D Michael Young (22 points, UCONN commit). On the way to the championship game last season a key contributor was 00 D Tony Andreozzi, who parlayed his strong season into a commitment to Brown. Andreozzi is a long, two-way, skilled defenseman who will be a key player for them at both ends of the ice. With G Aidan Porter back between the pipes, sporting a sub-2.00 GAA, expect another solid run for Rivers.

NZ’s Take: Rivers did lose some talent but they have a talented core returning at every position, most importantly Porter in net. Porter will be the best goalie in the division and he’ll help during the early part of the season where Rivers is plugging in new faces to play more important roles after the departure of several key seniors. It should be a dog fight between St. Mark’s and Rivers but we give River’s the edge because they’ll be older and more experienced.