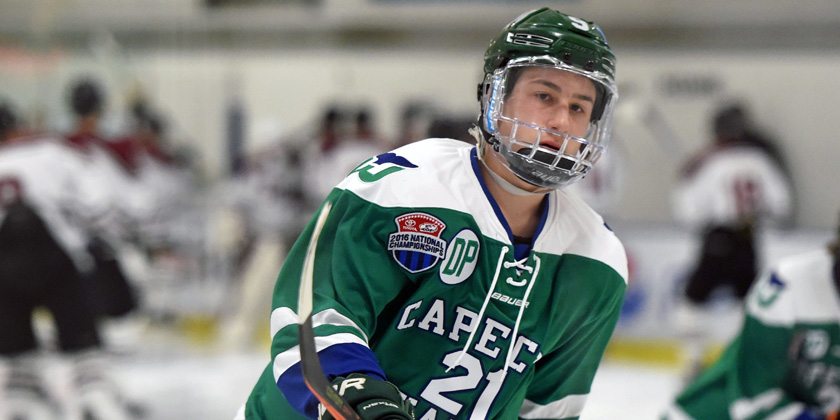 Ben Thomas made the decision yesterday afternoon that he will play his college hockey at Union. He has been a top echelon forward in the New England Prep ranks for the past two seasons; however, he, in many ways, took a different path. While faced with the opportunity to play at some of the top prep programs he chose Winchendon, who at the time were a struggling program. Fast forward two years and now they are a true prep contender, a lot of which has to do with Thomas and also the players he helped bring to the program (Scoville, Mulera, Fawcett).

“When I was choosing which prep school I wanted to attend I had a lot to think about, but what drew me to Winchendon was Coach Sampson, playing on the top two lines as a freshman and being an impact right away,” said Thomas. “From the minute I stepped on campus, I have loved Winchendon.”

While working at USHR, our Director of Scouting first noticed Thomas two years ago after being told by Brett Riley (Albany Academy Head Coach) to attend the Albany Academy Tournament because there would be some young, under the radar prospects there. He was one of the best players on the ice as a freshman but it took almost a year before the college actively recruited him. “I started hearing from colleges close to a year ago and it was a long and stressful process but a fun one at the same time. I heard first from colleges after the National Development Camp last summer and again after Beantown Classic.”

After a strong performance at National Camp and Beantown Classic he went on to play fall hockey with the Cape Cod Whalers, one of the top split season programs in the country. His stock continued to rise going from a 3 star prospect to 3.5 as the season went on. He played on one of the top lines in prep hockey with Matt Fawcett (Quinnipiac) and John Mulera (Providence) and finished with a 13-16-29 line in only 21 games. What was unique about the line was that Thomas, who is only 5’10” was the big guy, as Fawcett and Mulera are both small, high skill, high pace players. “I feel as if I am becoming more of a well-rounded player day by day, that being said my main strength is my offensive ability. I feel I have a high hockey IQ and vision, I can put the puck in the net and set my teammates up for goals just as well. I plan on working on my first three steps and becoming a more explosive skater and improving the little things in my game as well.”

So why Union? “I visited Northeastern and Merrimack but Union was by far the best fit for me. When I toured Union, I instantly knew that I wanted to play there. The entire school was amazing and Coach Bennett, Dumais and Tapp made my decision very easy.”

He went to Dubuque’s camp three weeks ago and is an affiliate for them, looking to make the move to the USHL in a “year or two.” This summer he, along with Fawcett and Cushing forward Marc McLaughlin, will be training in Rhode Island, having a power skating session in the mornings and off-ice conditioning in the afternoon. He’ll also be playing on Vinnie Montabano’s East Coast Kings team. We asked Vinnie, an amateur scout for the St. Louis Blues, what type of player Union will be getting in Ben Thomas. “Ben is a very skilled and smart player. He has great vision and offensive zone instincts. His work ethic off the ice is what is even more impressive. Union has picked up a tremendous player who will continue to keep getting better.”

At the close of every interview we ask the prospects, after going through the college recruiting process what advice they would give to the next crop of players who are just starting out.  “The best advice that I could give is to be patient and work hard every shift because you never know who is watching. The best advice I received was when I was on the ‘99 Providence Capitals and it was our last game together and we had just lost in the playoffs and the locker room was very sad, Coach Sullivan gave us a speech that has stuck with me to this day. He said ‘boys, if I can leave you with one piece of advice it is to never stop competing,’ he was so influential to all of us. Clearly he gave good advice, the kids on that team have been pretty successful since then.”  In fact, as noted by Mark Divver who covers all things hockey in Rhode Island, he is the fifth player off the ’99 Providence Capitals  team to earn a D1 commitment.

This commitment moved Union up 8 spots in the 2018 Recruiting Class Rankings (founded under the team rankings tab).